It’s only natural to wonder after a split if you should make up.

Like doing drugs, it’s never a good idea. I’m here to give you some break-up advice on why you need to make sure your ex stays an ex.

If you’ve never watched Parks and Recreation, this is hands-down one of the best mockumentary comedies. Ever. No really, ever. I would strongly urge – as in bug you daily until you get season three and watch every single episode

. And then watch the rest.

The cast includes Amy Poehler, Nick Offerdahl, Rob Lowe, Chris Pratt, Rashida Jones, Retta, Asiz Ansari, and other regulars who will make you laugh until you cry at the inner workings of the slightly deranged and ridiculous Pawnee, Indiana – Parks & Recreation Department.

The episode opens up with Ron’s second ex-wife: Tammy II. So named because his first ex-wife was also named Tammy. Also, his mother goes by the nickname Tammy.

Tammy II is a librarian. She loves wielding her heinous power to harass him with overdue book fines. She’s just about the worse incarnation of an ex-spouse anyone can have.

[You learn quickly that in Pawnee the library is a diabolical place. Don’t ask just get the show and watch it now.] Tammy II is 50 times worse than your ex.

Ron’s co-worker Tom (Ansari) tries to get back at Ron for dating his normal ex-wife Wendy. Tom’s version of boyish revenge is to show up at a local bar with Ron’s ex-wife Tammy II (brilliantly played by Megan Mullaney – Offerdahl’s real life wife) as his “date.”

Leslie witnesses the unholy union entering the bar and is horrified. She knows the Kraken is about to be unleashed.

Ron and Tammy II have an altercation which results in the police getting involved. (Sound familiar yet?) They decide to be adults and talk it out.

Talking it out is never a good thing. 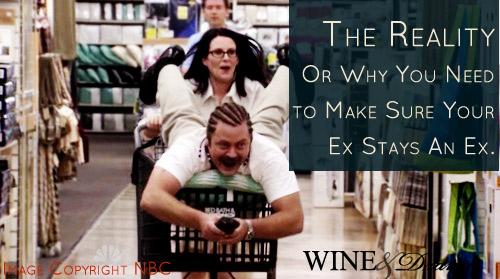 The Only Break-Up Advice You Need to Remember

Do the childish thing and pretend as if the other person doesn’t exist. That means ignore them…forever.

For god’s sake do not talk to them. If you happen to be in the same place, walk away – as in now. Get up and move in the opposite direction.

In other words, don’t text them, don’t Facebook-stalk them, don’t listen to their voicemails on an endless loop, don’t look at old photos, and don’t replay every wonderful, moonlit moment in your mind. Just don’t.

No amount of ‘trying’ will put your Humpty Dumpty of a relationship back together again.

You can’t, for one second, believe that you can have a normal friendship with this person. Maybe in ten years, let’s revisit it then.

If your break up was recent: don’t kid yourself!

If you have shared children, you can’t ignore your ex because you have to be able to co-parent. My advice here is solid: restrict the conversations to the children only.

Here’s the thing, talking it out and being friendly doesn’t work because you still have feelings for this person. If you didn’t, you would be able to move on. You can’t move on when you’re trying to think of ways to fix it.

Except in very rare (as in, probably not your situation) cases, if you weren’t able to fix things the first time, it’s permanently broken.

You can’t afford to be wishy-washy here. This is serious, pay attention.

Once you’re out, you’re out, and you need to stay out.You have to accept that the relationship is over.

As painful as this is you’ll get over it in time. Trust me. You will.

If you don’t keep the distance between you and your ex, it’s only a matter of time (in more than a week but less than a month, if we’re taking bets) before you run into them. If he or she shows any hint of remorse, you’ll start to talk again.

Bad things happen when you start talking to an ex again.

Talking only leads to screaming, screaming makes you angry, anger fuels desire, and the next thing you know you’re sticking your tongue down their throat.

Then you’re completely derailed and you’re in Wal-Mart at midnight registering for fishing poles and Corningware plates.

The next day you end up remarried, with corn-rowed hair, and wearing a dirty kimono. Ron Swanson, I’m talking to you, my friend.