When my friend Kelsey showed up to have a lady party with Stark Raving Malbec by Rosenblum Cellars and Fancy Pants Red Wine I was thrilled.

I immediately grabbed the bottle with its vintage grunge-looking sexy mad scientist on the label and asked, “Is this Tony Stark from Iron Man circa 1910?” 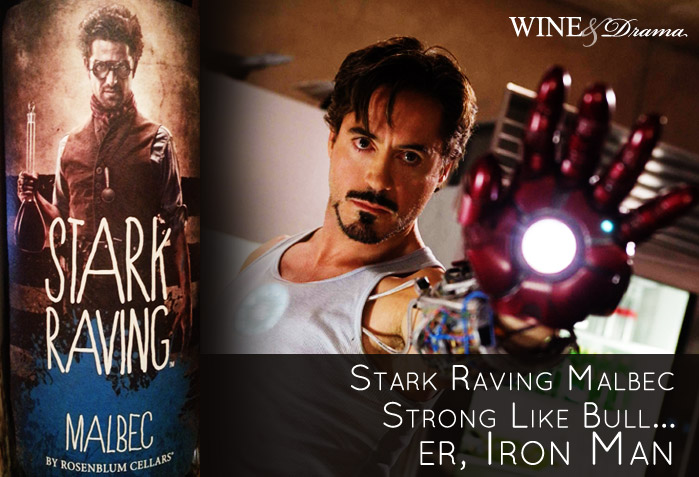 “That’s exactly why I bought it. I loved the label. I knew you’d get it!”she giggled.

Her husband Tim rolled his eyes.

“The label is very manly. I like it. So we’ve got the alpha male in Stark Raving and the hyper feminine with Fancy Pants. The perfect yin and yang. You’re so smart Kelsey.”

We clinked our glasses together after oohing and ahhing over the labels for at least fifteen minutes.

While Tim delighted us for the next ten minutes with a story of a fascinating conversation about Comic Con with a bodybuilder he met at the gym. At the end of it he still couldn’t tell if he spoke to a man or a woman.

Stark Raving Malbec from Argentina was developed by winemaker John Kane (part of Rosenblum Cellars). These wines are made to gulped or slurped, meant to be simple to drink like grabbing a beer.

It was easy enough for us to slurp since Stark Raving Malbec has a screw top. Sometimes I get nervous around screw top wine bottles because I’m afraid that the wine will taste like five-dollar gas station wine or gasoline.

But life is tough for us on a weeknight while trying to put small unruly children to bed at seven o’clock, so we gave it a go.

The label says that this Malbec wine tastes like berries and smoky bacon. Well I didn’t detect any bacon, but I did taste the berries particularly blueberries and black cherries.

I did pick out a toast flavor, maybe that’s because I like bread. It also has a hint of thyme to it. Stark Raving Malbec is a rich, smooth wine with a strong tannic structure but it doesn’t overwhelm the wine with leather notes.

Strong, juicy, and flavorful – at around $11 it’s perfect with steak, bacon, or a pizza. Iron Man would drink it and it’s definitely Wine & Drama approved.

I think you'll love reading:
Marriage & Communication: How Not to Inflict Violence on Your Talkative Man
Dangers of Confident Women & the Chocolate Block Wine Review
Why Unacknowledged Love Hurts Like a Mo’Fo
Besieged Wine Review and Bad Drinking Etiquette

Get Your Free Wine Cheatsheet

Did you get a chance to read part one of the series the Anti Fairy Tale - Learning to Love Yourself? ... END_OF_DOCUMENT_TOKEN_TO_BE_REPLACED 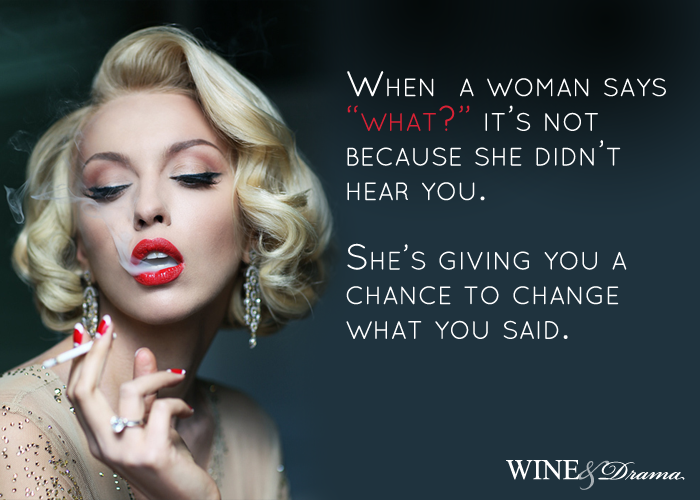 Marriage & Communication: How Not to Inflict Violence on Your Talkative Man

What "they" don't tell you about marriage and communication, is that the differences between men and ... END_OF_DOCUMENT_TOKEN_TO_BE_REPLACED