I was craving pizza the other day. I wanted delicious pizza…

I’m talking about pizza that’s the closest thing to actual Italian pizza this side of the Atlantic in the South.

Now I know that I’m not going to find the exact copy in the land of Hot Chicken. But I did find a hidden gem of a Neapolitan pizzeria at DeSano Pizzeria in Nashville.

DeSano’s makes pizza in the Naples tradition or “Tradizionale di Napoli,” with flour flown weekly from Naples, Italy. And they follow the rules of the Associazione Verace Pizza Napoletana (VPN) when making their Neapolitan-style pizza.

This means NO fancy toppings for you! That’s right, no spicy meatball or pepperoni, my friend.

This style of pizza is only prepared with a simple dough using Napoli flour, San Marzano tomatoes, Mozzarella di Bufala Campana (made from water buffaloes), fresh basil, and olive oil. It’s prepared in a wood-burning oven.

And you know what? That’s all you really need anyway. Your grandma didn’t have 30 versions of pizza. So you’ll be happy eating this. Trust me.

That’s why Neapolitan Pizza happens to be on UNESCO’s list of intangible cultural heritage. 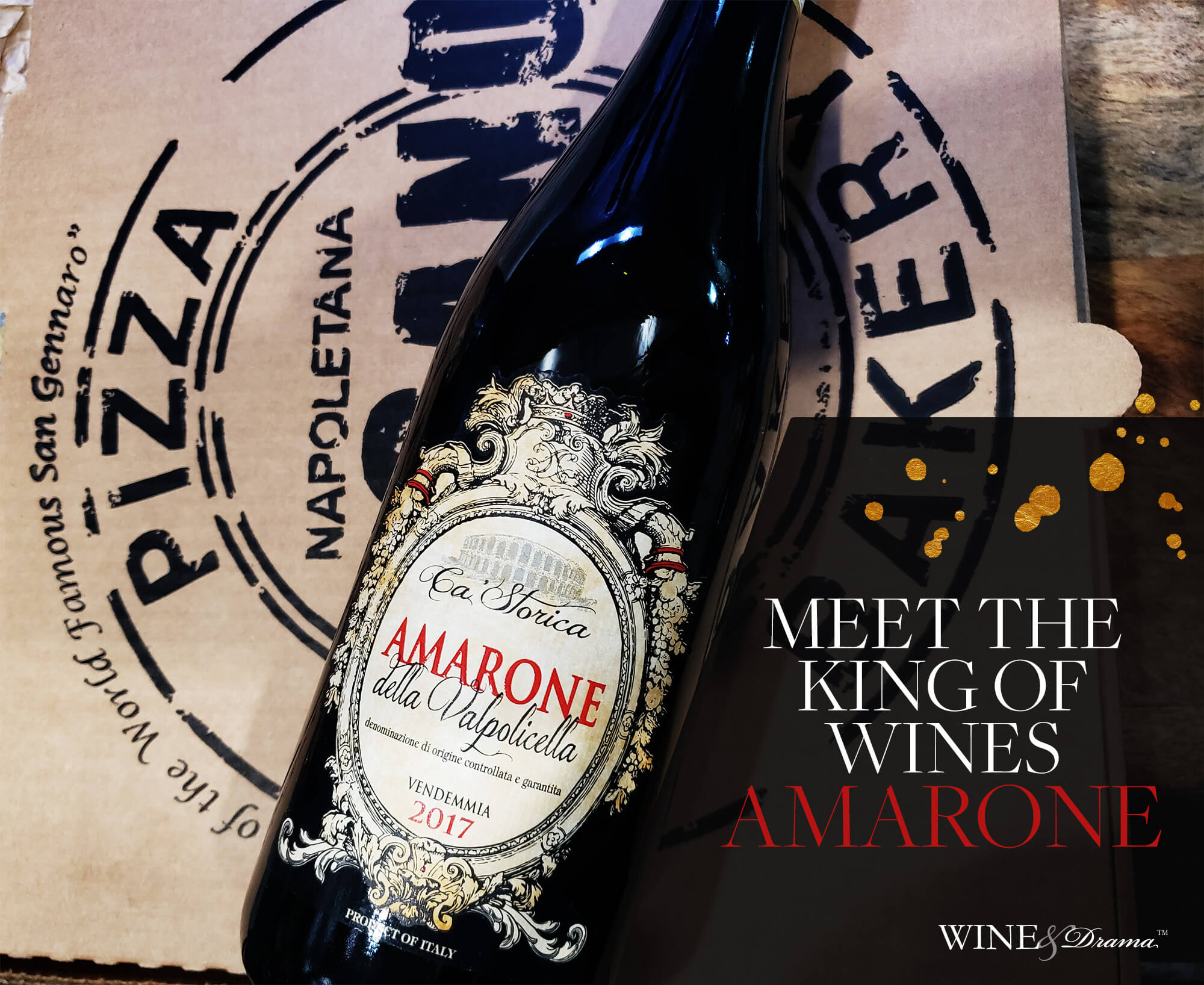 When thinking about what bottle of wine I would pop open to eat with our prized pizza…that I was cradling like a newborn infant.

(I didn’t trust it in the backseat of our car as Mr. W&D was zipping along the freeway. I wanted to keep it secure in my lap. So although it was hot, I pretended it was a lap warmer).

I instantly knew it was going to be Amarone wine. Eager to open my newest Ca’ Storica Amarone della Valpolicella wine from Trader Joe’s to enjoy with our Neapolitan Pizza.

Suddenly I laughed out loud. Mr. W&D wondered what the joke was.

I explained to him that Amarone della Valpolicella Wine AKA the king of wines, comes from the Veneto region of Italy. It’s in the north near the Swiss alps and borders Liechtenstein and Austria.

While Napoli is about seven hours south near the start of the boot of Italy.

Talk about taking a trip for a slice of pizza! These two regions couldn’t be more different.

In Veneto you have polenta, risotto, tiramisu, and of course Aperol spritzes and Bellini’s!

In Napoli, you have their famous status-protected pizza, pasta, and seafood dishes. Suffice to say, Mr. W&D didn’t see the joke. But I digress.

Amarone wine is a perfect pairing with pizza, especially Neapolitan pizza. It cuts through the delicious cheesy tohmato-ey goodness of pizza to clear your palate, so you can get ready for another bite.

Why Is Amarone Wine So Expensive?

Now, Amarone (“a-mah-ROH-nay”) is usually a luxury wine that can break your piggy bank if you aren’t careful. The midrange version will run you $50-$80 a bottle.

Amarone wine was enjoyed for centuries first by the Romans who loved boozy wine (15% alcohol, yes please) and then later on by royalty and noblemen; when Venice was a republic, it was affectionately known as ‘Vino dei Dogi’ (the Doge’s Wine or the Duke’s Wine).

You see, there are levels to Amarone wine ranging from lighter to richer and full-bodied. The Duke’s premium version of Amarone can cost anywhere from $150-$300:

You should always feel rich while sipping Amarone wine.

So, what makes it so expensive?

Well, it’s made differently than regular wine… It’s made from partially dried grapes.

To make an Amarone wine, you need to harvest the grapes late in the season, usually mid-October, and then carefully spread them out on straw mats in an airy loft to dry. 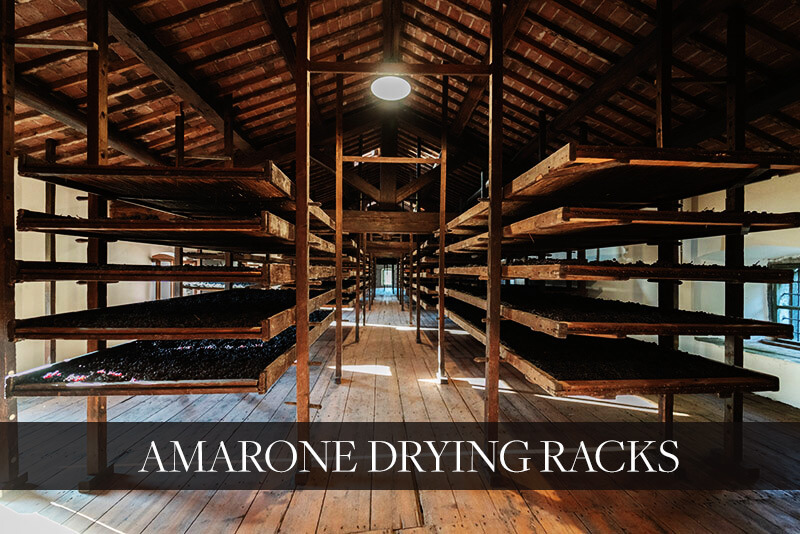 Here’s where the magic happens, as it can take at least four months to get the grapes to the ideal state. First, you want the grapes partially dehydrated, so they have lost up to 40% of their water weight and become deliciously concentrated in sugars.

This unique drying process is called “appassimento” (that’s Italian for “passionate”) and mainly occurs in Valpolicella.

This process creates a higher alcohol content in addition to more flavor. Woohoo! This is what separates Amarone from other wines.

So when I first saw Ca’ Storica Amarone della Valpolicella 2017 ($16) made from Corvina, Molinara, and Rondinella grapes aged in oak for at least six months at my local Trader Joe’s, I had to do a double-take!

In Italian, the name Amarone literally means “the Great Bitter”; initially, this was to distinguish it from the sweeter hard-to-find Recioto wine produced in the same region.

Thanks to this fascinating process Amarone della Valpolicella is a bold, complex dry red wine.

My Trader Joe’s Ca’ Storica Amarone della Valpolicella 2017 (14% alcohol) was medium-bodied and garnet in hue. Packed with maraschino cherries and blueberries on the nose. This was followed by cocoa powder, cassis, hints of dried figs, whiffs of Maduro cigars, and rounding out with mouth-puckering acid and leathery tannins with a short finish.

This wine needs to definitely breathe for at least an hour or pour into a wide wine glass and wait 20 minutes to let it open up.

Traditionally the Duke’s Amarone wine was served with donkey stew. Anyone?

Although some say it’s notoriously tricky to pair Amarone wine with food, I beg to differ…

But wait, there’s more…You could pair it with oxtails, lasagna Bolognese, salmon, mushrooms, Asian cuisine, and even roasted vegetables.

Ca’ Storica Amarone della Valpolicella 2017 wine is definitely Wine & Drama approved. This is a fantastic value from Trader Joe’s! Get it while you can.