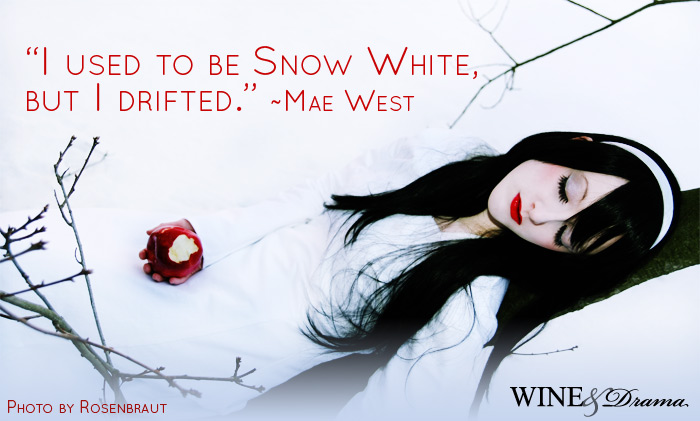 Once upon a time, in a land much like the United States, lived a young beautiful girl who dreamed of large metropolises and champagne brunches.

She knew the world held glorious possibilities and that she was special. So she packed up her pink sparkly Samsonite suitcase and set off on an epic adventure.

She moved across the country, met the love of her life, and started to live her wildest dreams.

Then her wicked stepmother cast a spell of guilt on her and she had to return from whence she came.

She packed up her suitcase, said goodbye to her love, and went back to the tiny town. Her champagne brunches were replaced by long days of answering phones, waiting tables, and taking care of seven small angry people.

Her glow faded and she became worn and tired. She looked around the small cottage and found a looking glass. She stared into the looking glass until she could no longer tell who the person staring back at her was.

She sobbed and suddenly there was a knock on the door. It was the friendly neighborhood farmer.

The farmer had brought a pail of milk for the small needy people to enjoy. She thanked the farmer and asked him in for a glass of wine. The farmer accepted and never left.

Several years later she now had ten needy people including the farmer to take care of.

This time she stared into the looking glass again and the young girl suddenly appeared. The young girl caught sight of the older and harried woman.

She was shocked and dismayed how the older woman could let them get into such a state of neglect and disarray. The girl flew into a rage and screamed, “What have you let happen to us?”

The woman was shocked. “Me? I did nothing! You left us! I had to pick up the pieces and take care of everyone!”

The girl grew hotter and lines formed around her eyes as she glared, “Well who asked you to do it?”

“Answer me. Who. Asked. You?” The girl demanded again.

“They needed me,” the woman said, breaking down.

“Did they ask you?” The girl’s anger gave way to sadness.

“No. Not in so many words, but they would have never survived without me.”

“Oh, but they will. Except you forget, I am going to die – because you stopped loving me,” the girl said quietly.

Now my dramatic fairy tale has a point. If you don’t love yourself who will?

I can hear you already. “Alexandra, I’ve got responsibilities, I’ve got a job, a husband, I’ve got kids, on and on…”

Sure, you’ve got kids to take care of and you don’t want child services knocking down your door.

In order to be the best mother, the best wife, the best daughter, the best sister, or even the best friend you can be – youneed someone.

You need a boyfriend and guess what girlfriend? That boyfriend is you.

You have to find ways to love yourself every single day just like the most amazing boyfriend or husband would – or you are going to literally wear yourself out.

Becoming your own boyfriend isn’t narcissistic. It’s a necessity. You are the only person on the planet that is going to take care of you.

The sooner you come to terms with that truth bomb and start to love yourself, the happier you’re going to be.

The Good News and Real Shocker: Everyone around you will be happier, too.

Check out part two: 10 Surefire Ways to Love Yourself… >>.