The other night, we did a marathon binge of five of the eight episodes of Dirty John: The Betty Broderick Story on a school night!

Most nights, I’m in bed by 11 pm at the latest, but I was mesmerized by Betty’s story.

I popped open a bottle of 2017 Mettler Family Vineyards Petite Sirah and let it breathe while I heated dinner.

If you don’t know, Betty Broderick is an infamous 80’s true crime story.

Betty loses her mind and destroys everything, and nearly everyone in her path after her 16-year marriage to her husband Dan implodes.

Dan ends up leaving Betty for his 20-year-old assistant, which created a battle royale and ultimately ended with Betty murdering Dan and his second wife Linda Kolkena.

She’s an average Jane who met Dan in college and worked to support the family while Dan finished his degrees. Dan later became a doctor (from Cornell) and a lawyer (from Harvard).

Back then, life was beautiful for Betty and Dan…

They moved to La Jolla in San Diego, California, and he became a successful malpractice lawyer and later started his own practice.

Betty is a great mom, she’s fun, and the emotional story of her and Dan’s life is refreshingly complex. They seemed to have the perfect life.

Because there are three sides to every story…

Yours, theirs, and the truth. 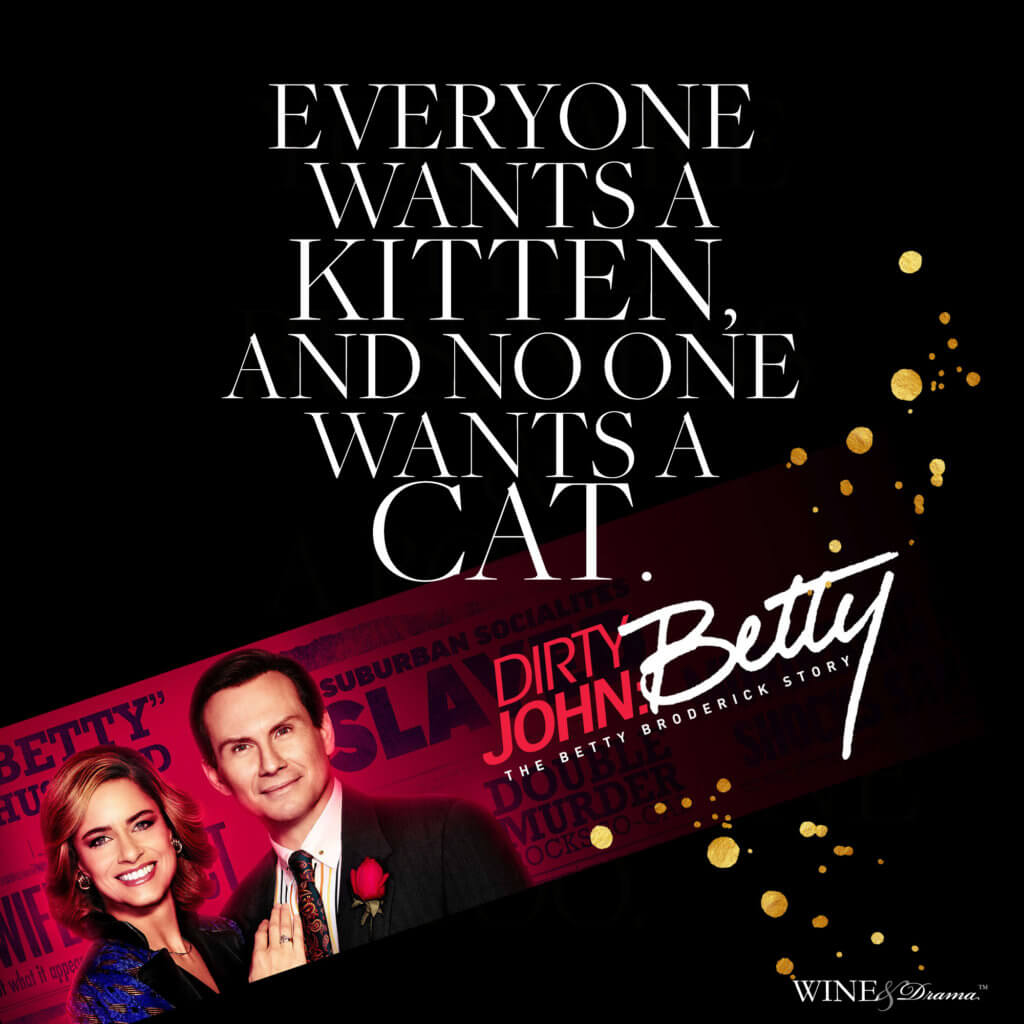 What I liked about the story is you’re witnessing it from inside Betty’s perspective.

As I swirled the inky purple wine and gazed at the legs forming inside my glass, I took a sip and closed my eyes.

Mettler Family Vineyard 2017 Petit Sirah is a wine that other Petit Sirah’s can be modeled off.

I contemplated Betty and Dan over another glass. They were so happy until they weren’t.

“Everyone Wants a Kitten, and No One Wants a Cat”

The gaslighting, the emotional terrorism, the fake kindness, the manipulation, and the pressure cooker of the relationship created the perfect storm for Betty (I’m not excusing her actions).

Betty clearly needed mental help. I know back in the 1980’s the protections for mental illness didn’t really exist.

It’s a train wreck, but there’s a lot of love in this story.

At its core Dan constantly gaslights Betty instead of coming clean about his affair.

You know there’s smoke, you can see it, but the other person says to you, “There’s no fire. You’re imaging the smoke.”

But you have to trust yourself.If you smell smoke, it’s because there’s a fire.

This story is insane, yet sadly I know how someone can get to that point. I’ve seen it firsthand as a teenager.

The Broderick’s story is incredible and the 80’s style is fabulous.

Betty says a memorable line when defending herself in divorce court, “Everyone wants a kitten, and no one wants a cat.”

Meaning the cliché of the older man leaving his longtime wife (who’s supported and sacrificed to help get him where he is) for a prettier, younger, and baggage-free woman is valid for a reason.

I thought about this in-depth as I am squarely middle-aged, I’m 45 years old.

But I also want to look as good as I possibly can, which leads me to my latest obsession: luxury skincare.

I spent $100 on a raw cacao and activated bamboo charcoal masque that looks like brown dirt that’s supposed to heal inflammation, fades hyperpigmentation, and stimulates collagen production and another $180 on a blue balm made with a mystical plant both from May Lindstrom Skin that’s supposed to make my skin glow.

On the plus side my pores have never looked smaller, and my skin is looking smoother than ever. I’m going to test this pricey new routine for another couple of weeks and then I’ll share my thoughts with you.

My sympathy for Betty ended when she walked into her ex-husband and his new wife’s home and shot them while sleeping.

There were so many different decisions Betty could have made up until that very point.

Betty could have made the most straightforward decision to get out of her own head for a minute.

She could have thought about how her children would feel if she murdered their father.

Betty is now in jail for life. It’s thrilling television and a cautionary tale.

I poured myself another glass of the classy Mettler 2017 Petit Sirah and watched the final episode. The Mettler family has been farming and making wine for over 100 years, and that’s something to celebrate. The wine is lush, grown in Lodi, and aged in French oak barrels with a dark chocolate center and whiffs of vanilla and cinnamon, you can easily settle into this wine.

At $25 a bottle, it’s a little pricier than my usual weeknight libation. But since we aren’t going anywhere, it’s worth it to be transported to a dreamy part of Northern California’s central valley where wine falls from the heavens.

So, grab a bottle of this Petit Sirah and let the drama unfold while watching Dirty John: The Betty Broderick Story, you can thank me later. How Cheap vs Expensive Wine Stacks Up - Baller vs Budget
Clueless on What to Drink? Discover How to Choose Wine By Flavors
The Wine Show TV Review on Hulu – Two Matthews Have Never Been More Right
Love Wine & Dessert? 10 Wine Slushies That Will Get You Tipsy In The Kitchen