Time to Get Ballsy and Drink Bougie Wine – Caymus Does Malbec

I’m not sure if you know this…

But I’m bougie as hell.

The urban dictionary defines it as, “Adjective meaning extravagant, often to the point of snobbery.

Usually used about the conspicuous consumption of the urban upper-middle class.”

“What kind of chips are those?”

“Man, those are bougie chips.”

So, anyway I’ve been thinking a lot lately, mainly because we can’t go anywhere other than our backyard.

One day a few months ago my stepdaughter was visiting, I showed her how I redid the guest bedroom.

She was smiling. I could feel the wheels in her head-turning.

“I like it! You’re so bougie,” she said loudly.

I could address her comment head-on or ignore it. I often choose directness, much to my family’s chagrin.

Now there are two ways I could have taken her comment…

The first was to be offended.

I come from people with hair-trigger tempers. I get offended if I break my yolk while frying an egg.

The second way was meeting her where she was, where her preconceptions of me currently lay.

“When you’ve worked as long as I have, you are entitled to be bougie. Nothing was given to me, I earned it all. That’s why everything I get is 99% what I want. When you get to my age, or hopefully before you’re as old as I am… you too can earn the right to be bougie and proud.”

She laughed, and I hugged her.

But it got me thinking…

…Are we subconsciously always holding ourselves back?

When shown the couch you really want, do you jump at the chance to get a fabulous couch, do you get mad at the price tag, or do you say, “Oh, I should get something more reasonable.”

Or do you avoid taking on a new project because you think you might fail, have no idea how to do it, and it scares you a little?

I know we all do it.

It’s hard to let go of familiar thought patterns that ultimately work against you.

My stepdaughter is 21 years old. I met her fully cooked.

I wasn’t able to add my spice into her cupcake mix and gently fold in my ideas and approach to life, until now when her cupcake is already frosted and decorated with sprinkles (her preconceived notions of how the world around her functions and her place in it).

Her father Mr. W&D is super generous to his children and me. He loves helping others, traveling in style, having an occasional cigar, and drinking fine whiskey. He’s an empire builder. His daughter lived with him for half her life, yet her point of reference is very different.

She asked my thoughts on her work situation during one family outing, and I said, “Don’t be afraid of anything. Just go for it. The worst thing that can happen is you don’t get everything you want.”

Stop throwing up roadblocks to your destination before you’ve gotten in the car and turn on the ignition.

If you don’t hit your goal, you’ll get closer than you would if you hadn’t tried.

If you don’t try, the answer is always NO.

Don’t hold yourself back.

It’s something we all do in little ways…

I did it the other day when I was standing in front of my wine cabinet and deciding what to drink.

It may seem trivial but hear me out.

I thought to myself…

I was excited to try the $54 bottle of Red Schooner Voyage 7 by Caymus Vineyards.

You can get a bottle of good Malbec for under $15 all day every day.  And my $5 Trader Joe’s Malbec would have been a good choice too.

Hmmm, I should really wait until we have company.

Oh, that’s right, global pandemic. No one is allowed in our house.

Maybe I’ll wait until I make a special dinner.

When’s that going to happen?

Having tacos is the highlight of our week.

Drink what makes you happy.

Decision made, I picked up the bottle of Red Schooner by Caymus Vineyards Voyage 7 and popped it open.

I even lit candles for our Sunday supper, which consisted of homemade Greek lamb and potatoes that we ate in our pajamas.

And let me tell you this wine was a revelation.

I let it breathe for 30 minutes, and it was lip-smacking good. 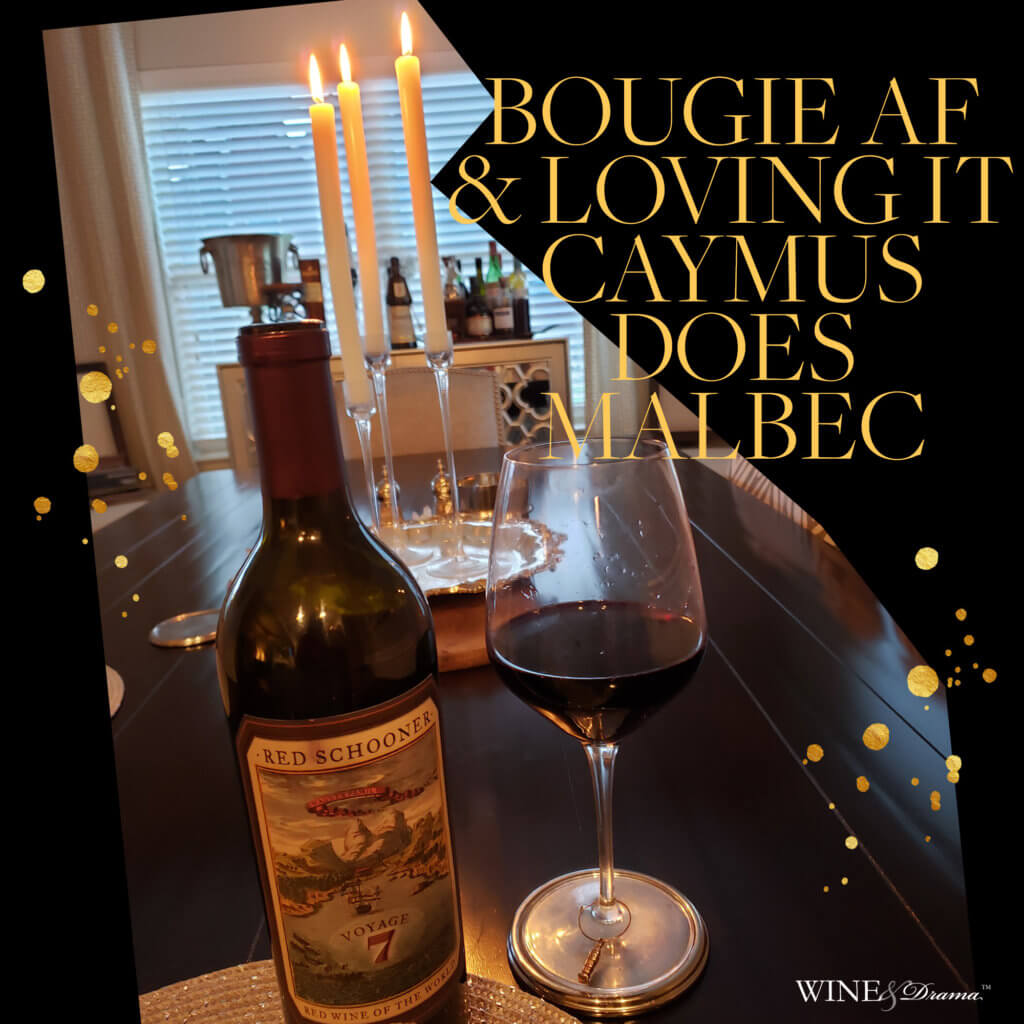 It is made from grapes grown in the Andes Mountains, shipped chilled to Napa Valley, and produced with the same techniques as Caymus Cabernet which runs $95 per bottle.

The beautiful thing about how they make this Malbec is they age it in French oak for 18 months.

It doesn’t include a vintage date but is known by the voyage from which it traveled (Voyage 7 is the 2017 vintage).

The terroir of Mendoza, Argentina, playfully slaps you as you sip this wine.

And then it’s a delicious trip across the sea to France with the structure of a Bordeaux – but made with Malbec grapes.

It’s an immensely enjoyable wine at a modest investment. The finish on this wine lingers and lasts for hours.

It was so good. I’m going to order a couple more bottles to drink whenever.

Get it and drink it.

Once you do, drop me a line and tell me what you think.

Now my dear wino, my slightly tipsy advice to you is – always choose the EXACT wine you want to drink and ASK for exactly what you want out of life.