How About a Little Whisky In Your Wine? Discover Bourbon Barrel Aged Red Wines

I love Bourbon barrel aged wines. There’s just something about a little whiskey in my wine that makes me giddy.

Now, mind you there’s NO actual whiskey in bourbon barrel aged wines. But the flavors of whiskeys made long ago and the spirit burly Scottish highlanders running around in kilts who brought whiskey to the new world, make these wines special. Thank you sirs.

But there’s one thing I have to clarify…

…All Bourbon is whiskey but not all whiskey is Bourbon. There is a difference.

Whiskey or (whisky, in Scotland) is made from wheat, barley, rye, and corn and then aged in wooden barrels. Pretty simple right?

But for a whiskey to be born as a Bourbon, it must be made in America or ‘Merrica (however you prefer to say it), and it must be made of 51% corn. Not only that it also has to be stored in new charred oak barrels that have never been used. Finally, a Bourbon needs to be distilled to no more than 160 proof and barreled at 125.

I’m not making this up ladies, this is actual bourbon law. Which came about in 1897 with the Bottle in Bond Act. Newly-made bourbon must be aged in bonded warehouses for no less than 4 years. Bourbon is a serious business especially in the Bible belt of the country where I happen to live. Serve someone bad bourbon and you’re banned for life.

So back to bourbon barrel aged wines, the reason why these wines are enjoying a special interest is that by aging red wine in bourbon barrels it adds chewy rich vanilla, smokey oak, voluptuous caramel, and dark chocolate notes to rich jammy Zinfandel or structured Cabernet Sauvignon.

A Barrel Meets a Bottle and They Walk Into A Bar

Aging wines in bourbon barrels seem to have started back in 2014 when well-known California winery Fetzer Vineyards first released its bourbon barrel-aged Zinfandel, known as 1000 Stories.

The resulting wine was bolder, richer, and more complex. Even though this was seen as a bit of gimmick, well here we are now aren’t we Carla.

Remember the thing about bourbon barrels that they must be ONLY made of NEW charred American oak barrels.

Once the aged bourbon is made and dumped out of the barrel, it can no longer be used for bourbon production. It’s done. And is now sold to another producer to start a new life. Which initially eager beer brewers were snapping them up and later on winemakers started demanding them.

Six years later and now we have entire wine brands like Cooper & Thief, Exitus, Apothic Intense, Stave & Steel, and 1924 that have built entire brands around bourbon barrel aged wines. Even the granddaddy of winemakers Robert Mondavi has a good Barrel-Aged Cabernet Sauvignon.

Now if you’re getting your panties in a bunch and want to argue with me that these aren’t “real” red wines…you’re right. I won’t clap back, but here’s the thing Karen, not every wine is meant to be a traditional wine.

These wines are intense, luscious, full-bodied, velvety, and deeply soul-satisfying as a treat.

These wines make great gifts and a wonderful surprise bottle for your hostess with the mostess. 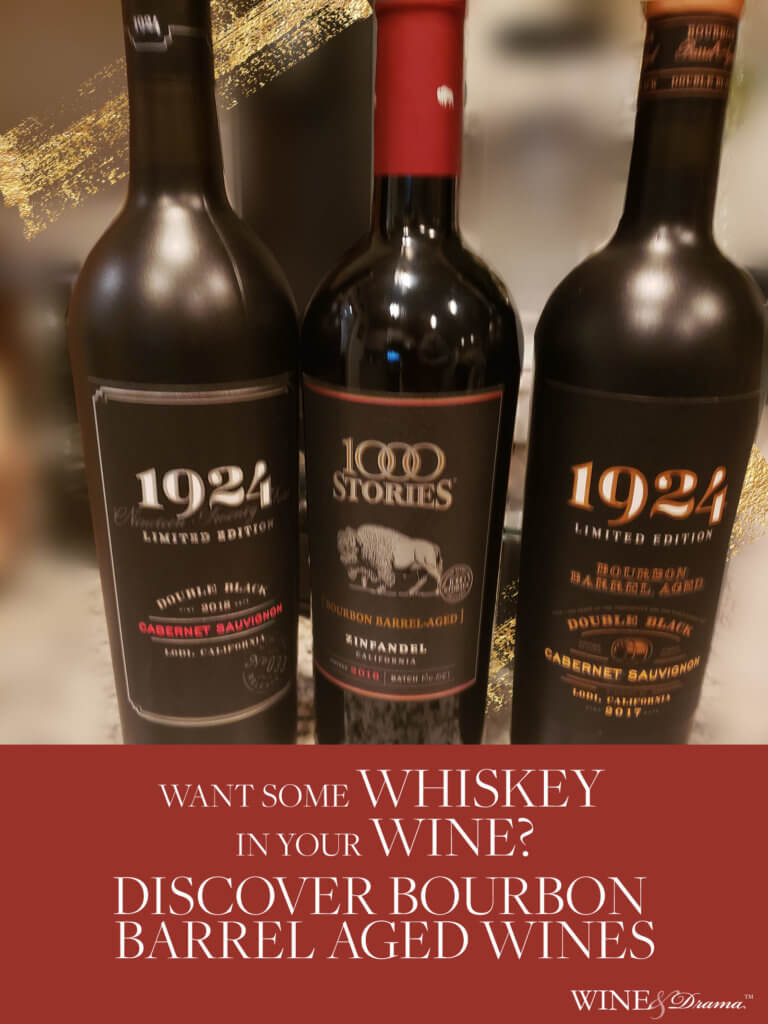 The trick to drinking a Bourbon barrel aged wine is to allow it to unfurl and open up. Decant it for at least 30 minutes or up to an hour if you can wait.

These are high alcohol wines – so if you’re planning on sitting and sipping you will get swizzled if you don’t nibble while you sip.

By giving it the chance to decant, this will open up the wine and let it flex its manly muscles. Then pour it back in the bottle. You’ve removed the heat from the bourbon notes and the wine opens up like a flower in the spring sun.

After a few minutes of rambling around my favorite wine shop, I found these two juicy Bourbon barrel aged wines plus an extra (because why not):

If you happen to enjoy a cigar these wines are perfect for sipping while puffing on a Maduro (says Mr. W&D).

Now go forth and grab a bourbon barrel aged wine or two. You can thank me later.