Give me a saga filled with intrigue, mayhem, and passion, I’m all in. I want more. Tell me a short story, a funny story, or an outrageous, and you have my heart for approximately the amount of time it takes me to listen or read.

But if it’s truly interesting you have my attention for a very long time.

After all don’t we all want be entertained in some way?

A Little Story About the Ancient Romans

You can make anyone feel a certain emotion or think nearly any thought you want as long as you couch it in a riveting story or entertainment. Kind of like the ancient Roman practice of bread and circuses.

Emperor Augustus wanted to keep the poorest of the population (which happened to be the majority) under control, so they wouldn’t revolt. He made sure they were well fed and entertained, by being a little devious.

Subdue the mass population by giving them bread to eat, satisify a persons immediate need for nourishment and then distract them by entertaining them with unbelievable and ridiculous forms of entertainment like deadly chariot races and even deadlier gladiator matches.

Feed the people, make them temporarily happy, and keep them from boredom, now that’s a surefire way to control everyone and make them forget about their long term problems, by gratifying short term needs.

Yeah, but Alex – that was back then what’s that got to do with today? Well things haven’t changed that much…

…We live in an era of instant, instant gratification, stories upon stories are told, we binge watch television series, gimme a selfie, Candy Crush, duck lips, a Kardashian butt shot, and break the internet – along with your attention span.

After all if you don’t share it all on social media – do you really exist?

It’s kind of like old question – if a tree falls in the forest and no one hears it, did it really happen? If you don’t post your emojis are they real?

Try a search for the hashtag blessed and see how many people are truly bored with their lives and how ridiculous it all seems. Now maybe that’s just my cynical side rearing its ugly little head, but there’s truth in it. How often do you find yourself wasting an hour on Instagram without even realizing it?

I was having Sunday supper with my brother and sister-in-law and while enjoying my recipe for slow roasted Lechon Asado, I opened a bottle of 1000 Stories 2014 Zinfandel. We were chatting about the complete lack of common sense some people show in their social media posts.

Do you really have to share every dysfunctional relationship move on Facebook? I’m talking to you Pauline. Is your ex trying to win you back? Are you really #blessed? No, you aren’t Pauline. No one really cares, because over time it’s just icky. No one wants to see your breakfast in bed escapade, no one cares that you shared a heart shaped brownie – keep it to yourself…again you Pauline.

Now, I don’t have to tell you what a wine label whore I am and couple with the fact that my brother loves Bourbon, 1000 Stories wine caused me to do a double take at my local wine shop.

1000 Stories Zinfandel is a bourbon barrel aged wine. It’s made by Fetzer winery and produced in smaller batches, “like fine Bourbon,” from Fetzer’s site – around 5000 cases. The label on the bottle shows a magnificent buffalo and reminded me of the western American pioneer expansion. It’s uniquely old west in it’s styling and appeal. 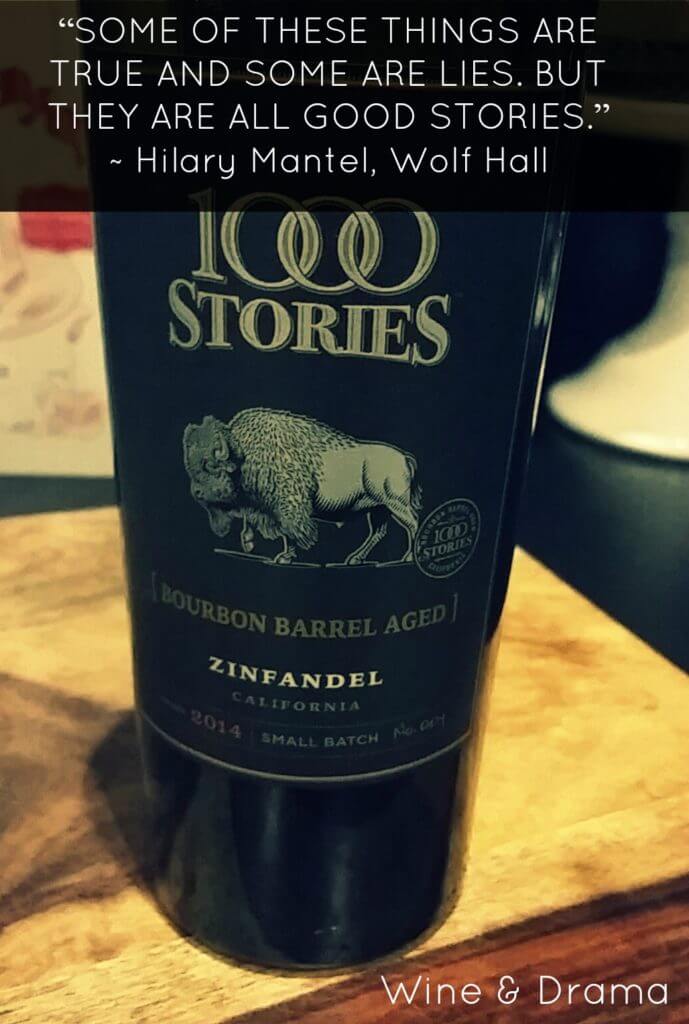 The Zinfandel grapes used to make 1000 Stories Zinfandel are sourced from vineyards dating back to the 1880’s in Mendicino county. Lodi and Amador have the oldest Zinfandel vines going back over 150 years.

1000 Stories Zinfandel is aged in American and French oak barrels that have been used for bourbon. Some of the wine was aged in new bourbon barrels, from popular Bourbon houses Heaven Hill and Four Roses.

1000 Stories Zinfandel wine is a beast. It’s an unweildy creature that settles down slightly and becomes decadent once poured into your wine glass. One whiff straight from the bottle and I was taken aback.

However once it relaxed in my wine glass…I could smell everything I enjoy about the odd glass of Bourbon. There’s boysenberry and cherry mixed with rich spice notes, some charred oak, smoke, vanilla, caramel, mace, nutmeg, and an herbal thyme note. It’s rich and languid on the finish and paired beautifully with my roasted pork.

1000 Stories 2014 Zinfandel retails for around $19 a bottle and can be found at better wine shops, but surprisingly I also discovered it at my local supermarket (top shelf). So, I’m pretty sure they’ve expanded production now to keep up with demand.

If you know someone who loves Bourbon, surprise them with this bottle and you’ll win their heart for the night. Tell them a fantastic story and you’ve got their attention as well. See…bread (or wine) and circuses.

But whatever happened to common sense? Whatever happened to keeping something private? Not every thought needs to be shared. I watch and love business guru Gary Vaynerchuck who initially started his media career selling wine. He’s the genius behind Wine Library.

I recently heard him speak at a conference and he said, “If you’re in marketing today – you’re fighting for attention spans.”

I share my adventures in wine and life, in the hopes that you’ll want to drink some of the amazing wines I discover along the way. I’ll share with you valuable and entertaining stories and information on wine, food, and travel…You might love it so much that you’ll buy a wine I recommend or a merchandise I designed.

But here’s the difference – I’m sharing with you an item that you’ll enjoy, something entertaining, something useful, maybe a wine you’ll grow to treasure, a find that won’t set off a shit show among your immediate circle because its posted online.

Media can be for entertainment, education, or solving a problem.  It shouldn’t be used to reveal every private moment or thought that could come back to bite you in the ass years later.

So remember these wise words, kiddos from your auntie Alexandra, “Drink up and share your stories wisely.”

Wine & Drama Movie Night- Mysterious Urbanite
Snoop Dogg’s 19 Crimes Cali Red Wine Review - Wine This Good Is a Crime
Clueless on What to Drink? Discover How to Choose Wine By Flavors
What Wine Glasses Should I Buy?