As a child I was obsessed with Greek mythology.

I’d read every story I could get my cookie crumb covered hands on – the more terrifying the better.

I loved how Athena was more than a little cray. She onced turned a lady into a half-spider, half-woman – because the lady boasted how great she was at weaving. Then promptly lost the weaving contest. That’s a whole new (ancient) spin on eating some humble pie.

Let’s face it, you wouldn’t want to meet any of the Greek gods or goddesses on the street, much less have them as neighbors.

Could you imagine if you got into a disagreement with one of them about where to install your fence? Your house would probably end up permanently relocated underwater in Atlantis.

That being said, one of my favorite creatures was the Satyr a half-man, half-goat, led by an equally demented Pan.

This dirty dancing man-goat lived in the woods and merrily followed Dionysus the Greek god of wine on his travels, frolicking with nymphs, and drinking.

So, when I was at Pullman in Montreal, my adorable Sommelier asked me what I really enjoyed drinking.

“Either Malbec or Cabernet Sauvignon.”

“But, what are you really feeling, tonight?” He prodded.

He returned with a bottle of Zickefoose 2009 Cabernet Sauvignon from Sonoma County, Norris Ranch, California.

It was a simple hand drawn label with a noble goat. I loved the detail on it. Plus, it was elegant. As you know that’s a big one for me, considering I’m a label whore.

As I looked at the lovely label, I immediately conjured up my fond childhood memories of dirty dancing satyrs.

I even found the illustrator of the Zickefoose wine label who’s name is Julie Zickefoose (no relation) as well! How great is that?

It turns out Zickefoose is German for “nanny goat’s foot”. Which meant back then when it was coined someone who was agile, not like me. I work at not bumping into things.

The proprietor James Taylor (whose family are Zickefooses) says, “Like the sure-footed goat, we took careful and precise steps required to create this special wine.” Yes, you did Jim. Well done. 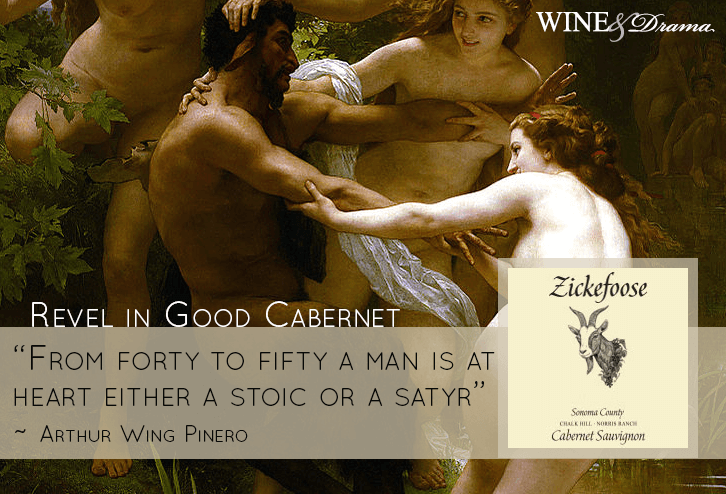 It’s all juicy blackberries, whiffs of cocoa, with subtle hints of French oak on the nose.

Zickefoose 2009 Cabernet Sauvignon swirled in the glass is a beautiful rich garnet color with soft tannins, super smooth, and so drinkable I had two very large glasses of it.

This is a beautifully structured rich fruit wine with a touch of peppery black currant has a smooth long finish.

It’s easy enough to drink alone or paired with meats like beef, lamb, or duck. One of the best things about Zickefoose Cabernet Sauvignon is you can buy several of bottles and stash them away for a couple of years.

I wanted to take the bottle and our sommelier home with me.

Sadly I could do neither, so I settled for ordering some Zickefoose 2009 Cabernet Sauvignon, online when I returned home.

Order this exceptional wine and you won’t be disappointed.

What's the Best Wine with Pizza?
Love Wine & Dessert? 10 Wine Slushies That Will Get You Tipsy In The Kitchen
Clueless on What to Drink? Discover How to Choose Wine By Flavors
Wine & Drama Book Night- Romantic Fantasy