Things To Do in Montreal – Drink Wine, Watch Men, Eat Brunch, and more…

Oh Canada!! How I love thee. When I was 19, a family friend somehow wrongly assumed I moved to Canada (I didn’t).

I would run into her, every so often when I visited my parents, and the first question that popped out of her mouth was always…

I would stare at her puzzled wondering why she was randomly quizzing me on the national status of our neighbor to the North.

“Yes, it’s very lovely. So good to see you again,” as I slowly backed away with a fake smile frozen on my face.

It took me a year to catch on…well not really, I caught on after the second time, but I liked playing dumb.

So, when I finally arrived in Montreal, I felt at home. Despite the fact that it was March and snow was still falling.

I embraced its new / old world charm like a comfy cashmere pashmina draped lovingly around my shoulders by a gorgeous metrosexual Montrealer.

Bravely I walked a path through Old-Montreal in the freezing slush and snow.

I enjoyed my first sugar shack brunch and discovered what’s affectionately known as sugar shack season or cabane à sucre. It’s celebrated every spring (from February to May) to announce the annual coming of maple syrup. It’s a huge deal. Did you know…there are around 200 cabanes à sucre in and around Montreal?

I fought the snow again and then blissfully passed out at my rented Airbnb condo.

I wanted to enjoy the city in full bloom and without a parka, so in July my bestie Char and I hopped a plane anxious for more things to do in Montreal.

During the summer in Montreal there are people dancing under a park gazebo in the afternoon for no reason at all. Such happiness. Sheer delight overtook the cynical part of my brain.

You’ll be amazed at the cleanest city streets, ever. Not to mention Montrealer’s are a quiet yet pleasant bunch.

It’s best to explore Old Montreal on foot. Please don’t try to rent a car. You’ll only end up in tears. Wander around and get your fill of the historic public squares at Place d’Armes and stare at the Notre-Dame Basilica.

The Montreal Town Hall looks a little like you’re in France. Which let’s face it if you can’t afford to cross the Atlantic, you can always pretend you’re in Paris when in Montreal.

Please Parisian’s don’t yell at me or email me…I know it’s nothing like Paris, but come on, you guys – you both have a shared culture and language, so stop it already.

One thing you must do in Montreal is eat and drink a lot.

I recommend staying at the Sofitel Montreal which is luxury, impeccable service, and comfort all rolled into one.

Don’t worry if you’ve never been to Montreal, if you don’t understand French everyone is bilingual and will switch to English in a millisecond.

Now, I don’t know if it’s your first time meeting me, but I belong to the church of brunch. I believe a weekend without brunch is like a Saturday without wine. Why?

One of the best places to have a quiet low-key brunch on either Saturday or Sunday is Suite 701 Lounge. That’s it pictured below in all its serene glory. (I’m so happy I got that shot.) 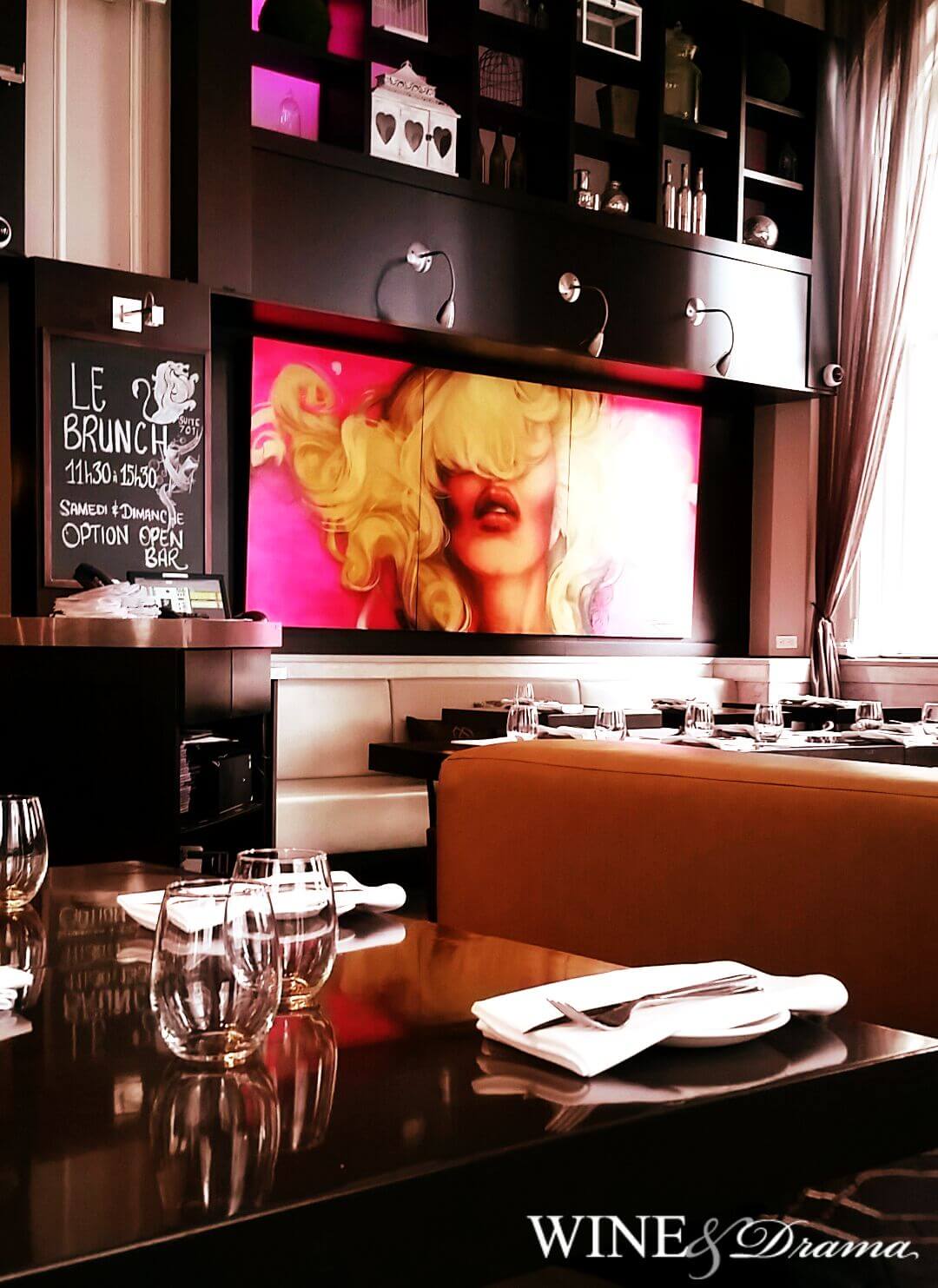 
As Char and I walked the immaculate streets we happened upon a couple getting married.

It was all very romantic, then I yelled, “Pourquoi?” (Why?)

Char grabbed my arm and ushered me away with promises of a cronut. I was momentarily distracted like a squirrel on crack. 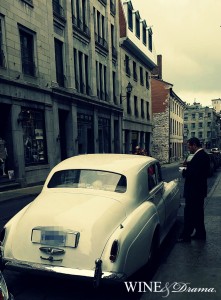 Char scolded me under her breathe about being nicer to newlyweds.

“I believe in love, I just don’t want to get married ever again. What’s wrong with that? Besides, I was performing a public service announcement.”

She rolled her eyes in reply.

Later we ended up at Market De La Villette and found the cronut we sought. Hello, foodgasm.

Next we passed a group of dashing men chatting in hipster style suits complete with ties, beards, and slicked hair. I gawked at a silver fox with a dusky five o’clock shadow. He smiled and nodded.

I turned and then saw a hot cop. The men here – I swear are all good looking.

They’ve got a European sensuality to them, that kind of makes it somehow not as offensive when they cat call at you.

Yes, my brain tells me, “That is JUST as offensive, DO NOT look. Don’t look. Don’t wink at him, you dummy.”

I recommend you spend at least part of the day at the public markets, either Bonsecours Market or Jean-Talon Market. I chose Jean-Talon which is more of an open food market than Bonsecours.

Get enough deliciousness to have a picnic in the park or in your hotel room.

Here’s what you must buy at Jean-Talon, don’t plan on eating out that day at all – you will have more than enough to eat once you finish walking around and shopping.

The next day when you’ve recovered from your food coma go to the Montreal Museum of Fine Arts. I was thrilled to meet a man I’d admired for years. 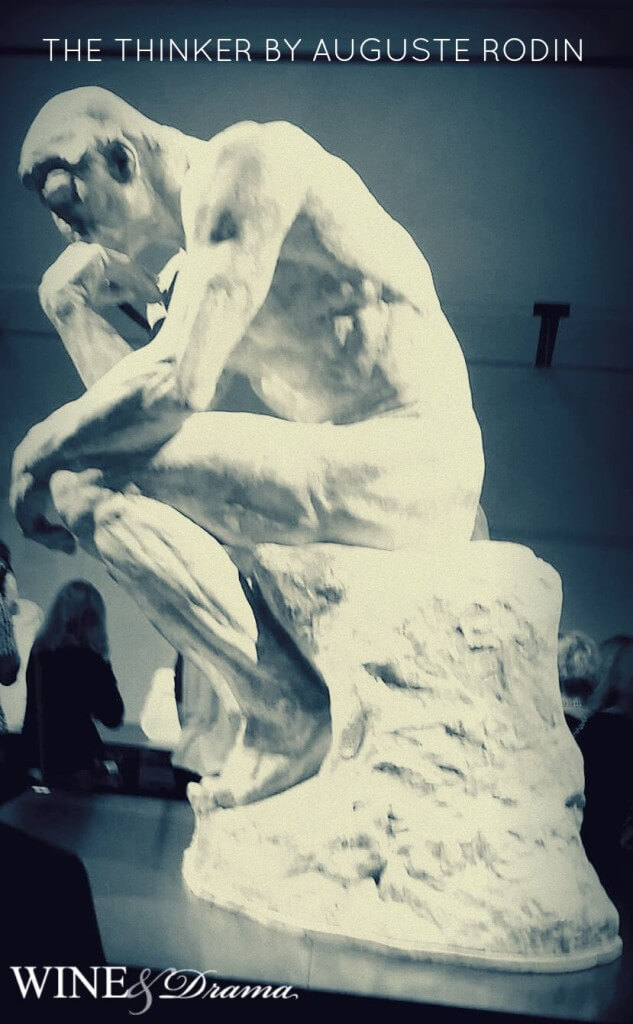 Then go back to your hotel and take a nap.

Now when you awake refreshed and famished, slow down for a minute, killer. We’re in for the long game, pace yourself.

Have an espresso and watch some late afternoon TV. As the night rambles on, take a long hot soak, and get ready for a night out in the city.

You’ll want to visit a lounge in the evening for real grown-ups called Pullman. It’s located on Avenue du Parc which reminds of me a laid back part of Brooklyn that’s not trying too hard to be hip.

Get ready to wear your favorite summer dress and open toed sandals because it’s summer in the city and it’s a nice one.

Please for the love of Champagne, if you love wine and you are desperate for a great evening out – that doesn’t involve tiny people throwing temper tantrums, you MUST visit Pullman.

Be warned it’s small. I mean it’s the size of a studio apartment, but don’t let that stop you. It has multiple levels and soothing modern minimal décor.

There’s a massive chandelier hanging over the bar made entirely of wine glasses that dazzles. I’m secretly plotting to recreate it for my dining room. If I ever pull it off, I’ll share a picture.

My ultimate travel companion and I arrived around 930ish and were immediately seated by an adorable host. So polite and very knowledgeable.

I really need to start writing down people’s names – because I never forget a face but a name is another story.

Our host / sommelier immediately guided us (without ever once being pushy) to the trio wine flights.

If you start your evening with the trio of bubbles you can’t go wrong.

My favorite of the bubbly’s was a Spanish Cava that was crisp, full of green apple, and had a creamy finish, that went excellent with our cheese plate.

Pullman serves small plates of cheese and meats (think artful miniature food). The desserts are amazing, but if you want dinner this is not the place. 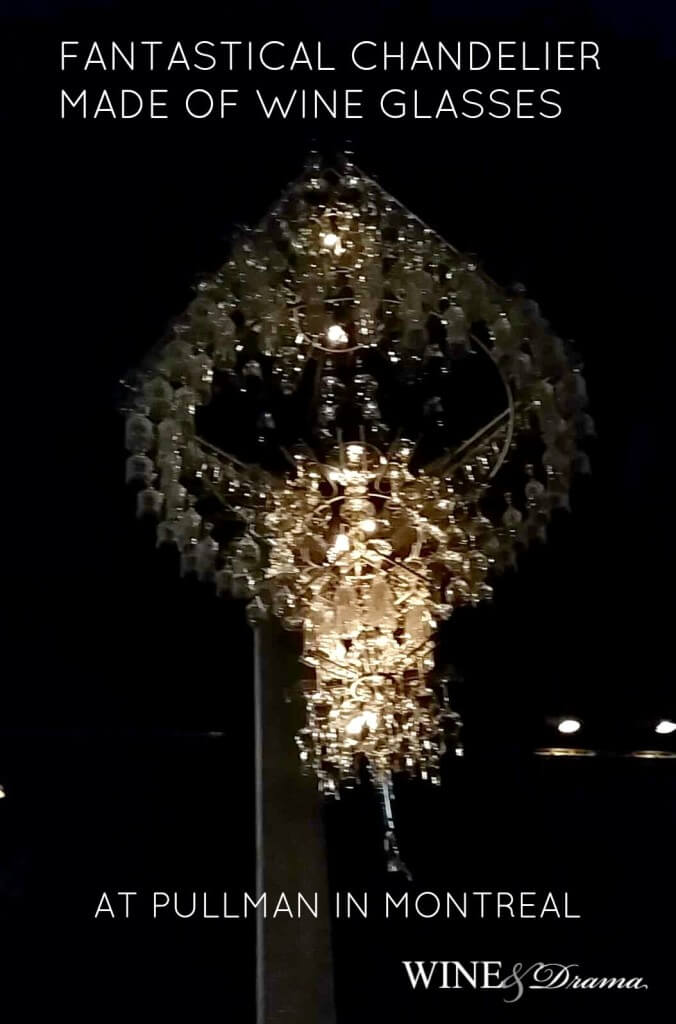 Our sommelier for the night gave us expert recommendations based on our tastes. He turned me onto a new Cabernet from Sonoma Zickefoose 2009 Cabernet Sauvignon, which I’m now obsessed with, thank you Mr. Cute Sommelier.

Three hours later – I was on a roll, channeling Oprah and asking Char profound questions.

“What was the happiest day of your life?”

“Would you marry your ex-husband again?”

“What did you learn from marrying him?”

“Why can’t men and women just be friends?”

“Why are our mothers so ridiculous?

“Do you think will we end up like them?”

Then she politely said I was getting rather loud.

Apparently my level of volume caused other patrons to become interested to our conversation.

Which in my current state of inebriation I interpreted as her accusing me of getting rather loud several times.

“Quiet down, they’re listening to you,” Char said.

To which I replied. “You, quiet done! You want to go somewhere else?”

And then we were done for the night. Char signaled to our wonderful sommelier to quickly call us a taxi.

I threw down my cash and included a generous tip, so he would remember me as the classy lady I am.

I’m sure he didn’t want our night to take a turn for the worse. It was dangerously veering towards laughing and crying territory. You, know what I’m talking about…don’t pretend to be innocent now.

Char being the great friend she is – Shut. It. Down.

Our taxi arrived minutes later and a handsome 40ish dark-haired cabbie stared at us curiously.

I got in the taxi and slid over, because you can’t let your girl cross a busy street to get into a cab. This is normal cab etiquette people.

Apparently Char wasn’t aware of cab etiquette. So, as I was sliding over, she was trying to get in on the same side.

“What are you doing?” She asked.

“I’m sliding over because that’s what you do.”

“Well you aren’t very nice and you don’t have cab etiquette.”

“Yes, but you love it,” and we both fell into uncontrollable fits of laughter.

“Are you practicing your French,” he asked.

“Where are you ladies from?”

“The States,” I answered.

“I lived in the states once about 15 years ago,” he said wistfully.

“I moved there for love. It only lasted six months, so I moved back.” He said.

“It was sad. But I never gave up on love. I was married and now I’m divorced, you always have to believe in love.”

“Can you drive any faster, this conversation is getting too syrupy sweet,” Char interjected.

He laughed. “I can, but what happens when I hit people?”

“You get points like in video games. Have you heard of the video game Frogger? Or Grand Theft Auto?” Char giggled. Now she was feeling her Riesling.

“You’re too much,” The cabbie said.

“That’s what her ex-husband said,” I blurted out.

Char and I fell into hysterics.

“You ladies are lovely,” he smiled.

“Yeah, but we’re divorced and bitter. Bitter party of two, your table’s ready,” I said.

“Well ladies, enchante. Here you are at your hotel.”

“Did you want to come up for a nightcap?” I asked.

“Umm, no he’s working, Alexandra.” Char said hauling me out of the cab.

“Maybe another time,” he smiled.

And that’s one of the many reasons why I love Montreal.

All of this reminiscing has inspired me to write a travel guide and itinerary for first time visitors to Montreal.

Oh, my evil genius is at work…

…If you want to get on the list for my amazing Montreal travel guide simply enter your best email below. You’ll be the first to know when it’s ready.
[ois skin=”Travel Guide”]
Still not sure if you should join? Did I mention there’s Poutine in it? Along with a full four day travel itinerary of the best things to do in Montreal.

You’ll get the inside scoop on where to stay, what to do, and most importantly where you should eat and drink.

Just enter your best email above and I’ll let you know when it’s available for you to get your hot little hands on, you savvy traveler you.