The people in my family procreate a lot.

On any given weekday, there is a random cake cutting to celebrate someone’s first report card.  We take trips to watch a baby flip over in his crib for the first time.

I have an abundance of nieces and nephews, so when one of my sibling’s say, “You gotta come over and watch the baby flip over, he’s hysterical.” I take that as my cue to bring over a bottle of wine and do exactly that.  Watch a mini person perform circus tricks at his parents’ whim.

These days between running my blog, my business, and family time – I tend to shop at the local wholesale store, can I get a high five?

I love being able to pick up 3 pounds of organic chicken at half of the price of the other mega organic grocer that shall rename nameless and 2 dozen cage free eggs all for under twenty dollars.  That leaves me with more money to buy wine.

As I was perusing their ever-expanding wine selection, I came across Besieged wine, 2012 Sonoma County Limited Released by winemaker Joel Peterson.

The ominous label of ravens flying above a dark prickly sky made me pause.  If the label makes me stop, you know it has me, and at $14 I couldn’t say no.

The winemaker Mr. Peterson has a flair for the dramatic, which I enjoy.

His winery’s description of Ravenswood 2012 Besieged wine, “Under a threatening sky, BESIEGED by rain clouds, lightning glinting in the hills, winemaker Joel Peterson worked alone to collect grapes destined for one of his debut wines.

As he worked, ravens laughed from above, but instead of being harbingers of doom, they brought him good fortune, becoming the totem for his winery.”

Yes sir, I’d like to meet you for that alone.  Life gave him bad birds that feed on dead animals and he turned them around into his creative spirit animal.  Well done.

When I arrived at my sister’s we marveled at her newly remodeled kitchen.  It was glorious and the children were in the full throes of a meltdown.

If you’ve ever experienced the joy of having more than two children under five together in one room, you know there’s a special moment that’s the catalyst where all of the children will have a simultaneous meltdown.

It’s at this point that all four children began to scream.  The eight-year-old being the oldest and wisest rolled her eyes and said, “I hate babies, they cry too much.”

At this time I say a little thank you prayer that my home is baby free and opened my bottle of Besieged. 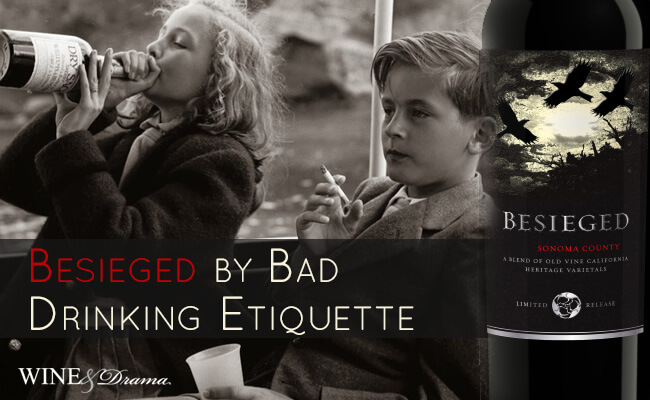 My brother walked in with our dinner, because ain’t nobody got time to cook on a Friday night with all these children running wild.  He plopped down $150 worth of sushi on the new marble counter and then we all started to complain.

“Why is there no spicy mayo?”

“Did you order extra edamame, for the kids?”

Since I am the placer of all food orders for our family, I am responsible for this catastrophe.  I ignore them and pour a glass of Beseiged red wine.  I marvel as the purplish black liquid coasts into the balloon wine glass.

I return to the program in the kitchen that is on full tilt crazy.

“I don’t know, check the bag, and of course I ordered it.”

My younger sister springs into action.  Since there isn’t enough spicy mayo, she makes more.

“How do you make it?”  My brother’s eyes widen as he is given the secret to life.

“Simple one part Sirarcha and four parts mayo,” she answers with a flick of her wrist stirring madly.

Besieged wine from Sonoma County is strong, it’s rich, and it’s grapey, yes grapey.  It tastes like there’s a jam party mixed with rich French oak exploding in your mouth.

This blend of Petite Sirah, Carignane (which is an old Spanish variety and one of the most common until the Merlot grape took over in France), Zinfandel, Syrah, Barbera (an intense Italian ancient grape), Alicante Bouschet, and Mourvedre all make for a smooth silky party in your mouth.

While we were all stuffing our faces with sushi and feeding the babies handfuls of rice, tempura chicken, shrimp chips, and edamame, little did we know my sister would do the unthinkable…

I asked her if she wanted to try my glass of Besieged.  My sister doesn’t drink red wine, she prefers what I call the juice box of wines, she’s likes them white and sweet – if it’s Moscato or Riesling it’s for her.

My other siblings and I who live to drink a bottle of red a night – looked in surprise and shock at each other.

Silently we all thought, “Would this be the night we turned her to red?”

I slid my glass of Besieged red wine toward her; she leaned in and inhaled it deeply.  This was a good sign.

Then in a flash, she stuck her hand in the wine glass, dipped her pinky in it, and tasted the wine off her finger.

No.You.Did.Not.Just.Do.That. Can you say horrified.

“Who does that? What kind of person does that?”  My brother bellowed.

My sister-in-law hid her face in her baby who was blissfully unaware.

“Oh my god, were you raised by wild beasts? That is the height of bad drinking etiquette.  You could have taken a polite sip,” I screamed.

“I washed my hands.”

My sister stuck out her tongue at all of us and continued daintily eating her sushi.

I swirled around my glass of Besieged Sonoma County red wine and contemplated throwing out the delicious red wine now full of my sister’s pinky germs.  But, wine contains alcohol and alcohol kills germs.  So I drank it instead.

Drinking Mettler Family Petit Sirah & Watching Dirty John: The Betty Broderick Story Review
My Top 10 Best White Wines and How to Pick Them
Voulez-vous Vouvray Wine? The Wine That Needs a Little More Loving
Are Luxardo Cherries The Most Expensive Condiment in the World?